8Bar bike adventures began with a first trip in 2012 when we crossed the Alps on fixed-gear bikes. Next was a Berlin to Prague tour without the help of a map (only checking our coordinates and compass twice a day) on our Singlespeed Cyclocross bikes . And then we headed to climb the Schneekoppe, the highest peak of the Giant Mountains in Poland, on our road bikes… In 2015, we (Stefan, Max and Stefan), sought our next challenge on the 8bar Mitte Adventure Bikes, deciding on the Atlas Mountains in the middle of Morocco as our destination – a striking divide line between the relatively humid climate in the far north of Maghreb and the extremely dry Sahara, south. Our start and finish point was Marrakesh, and the route concept was to cross the mountains straight to the south, and ride along the southern edge for a while before crossing the range once again to get back to Marrakesh. At the end of some rough planning, our eight-day trip covered a distance of 840 kilometres with an overall altitude of 12,000 metres, which meant riding an average of 105 kilometres/day. Since this region of Morocco is relatively sparse, we brought everything we needed to camp outdoors and be self-sufficient. That way we were able to be more flexible with our journey; the way we liked it… 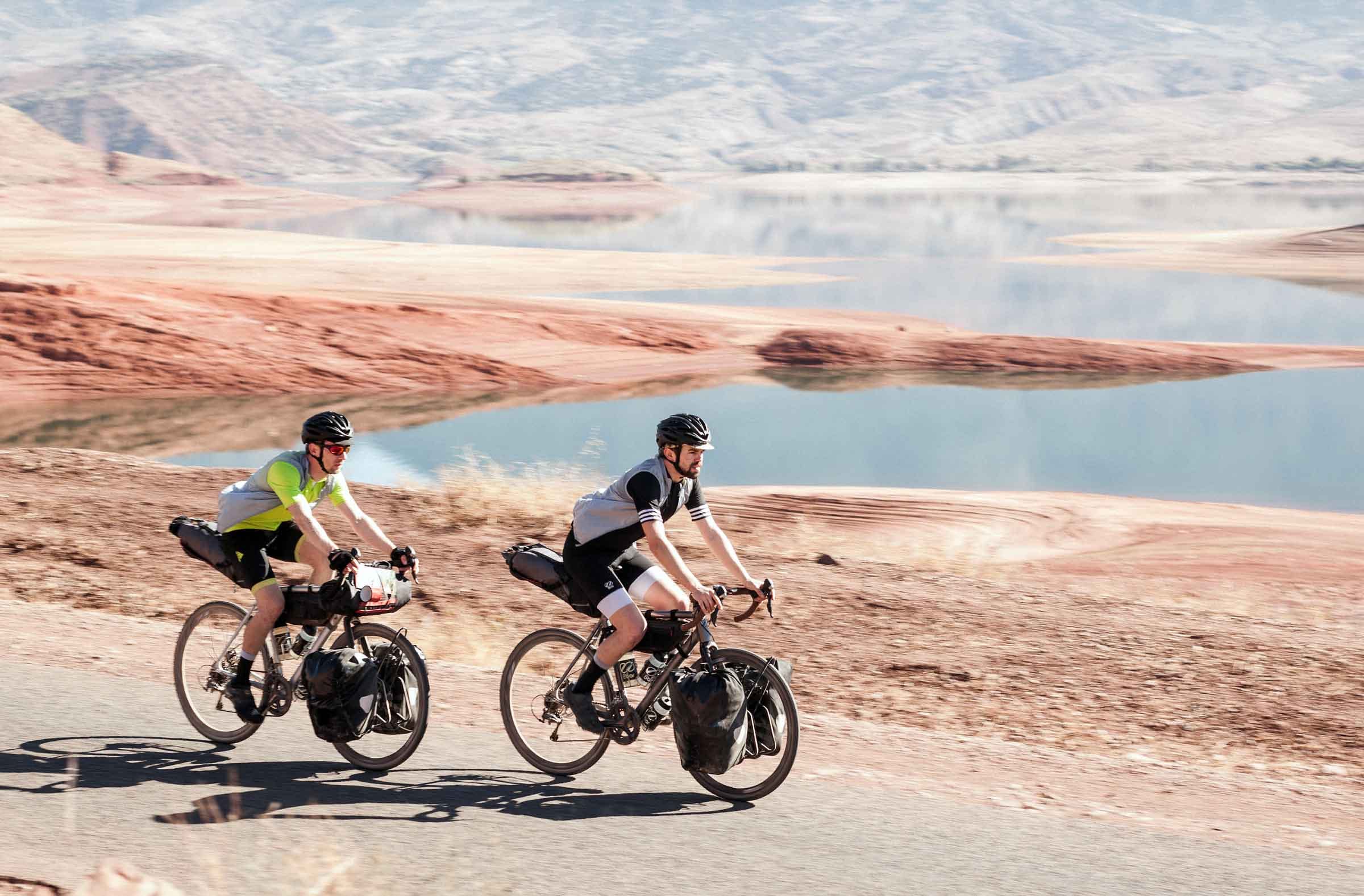 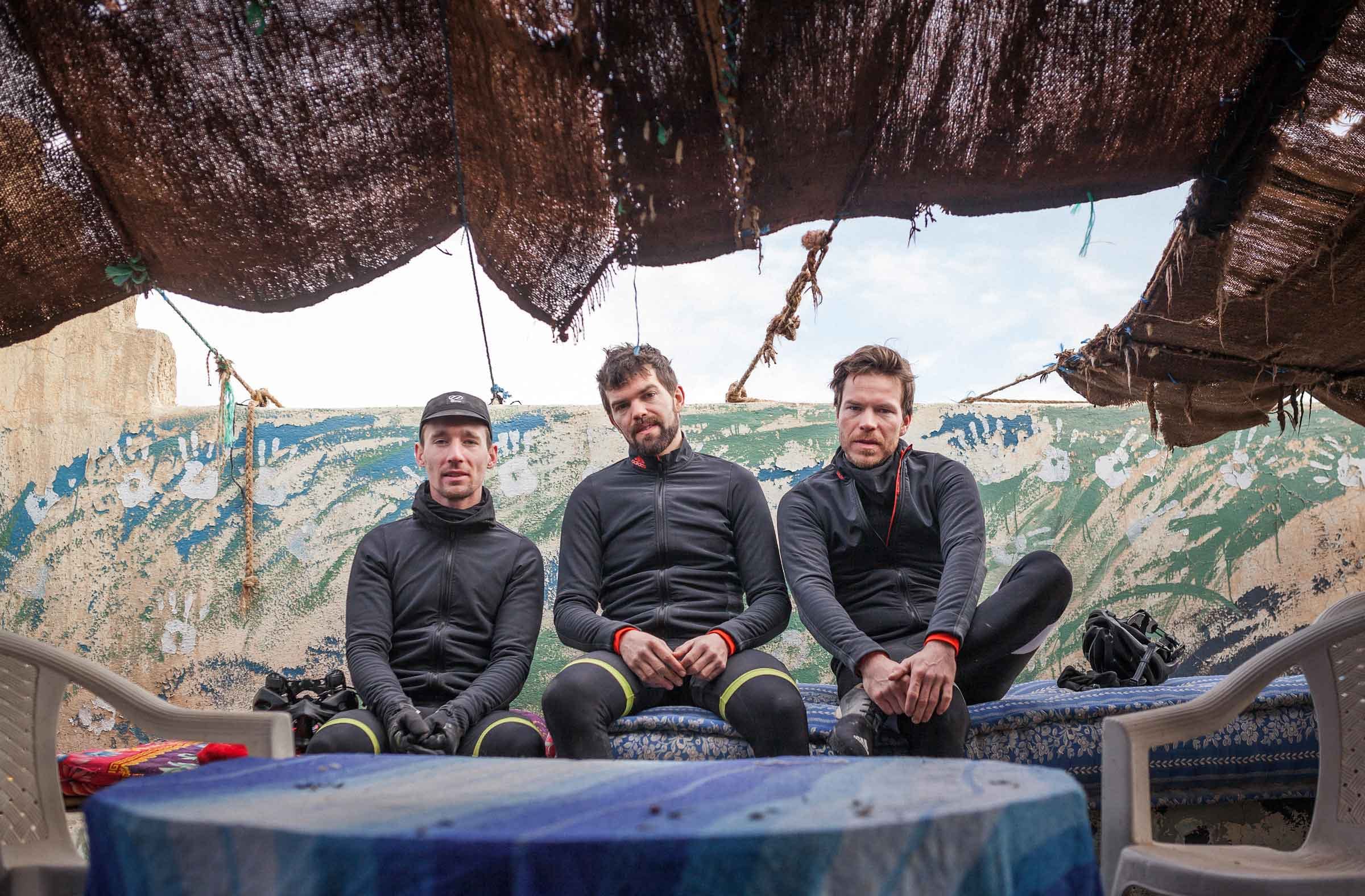 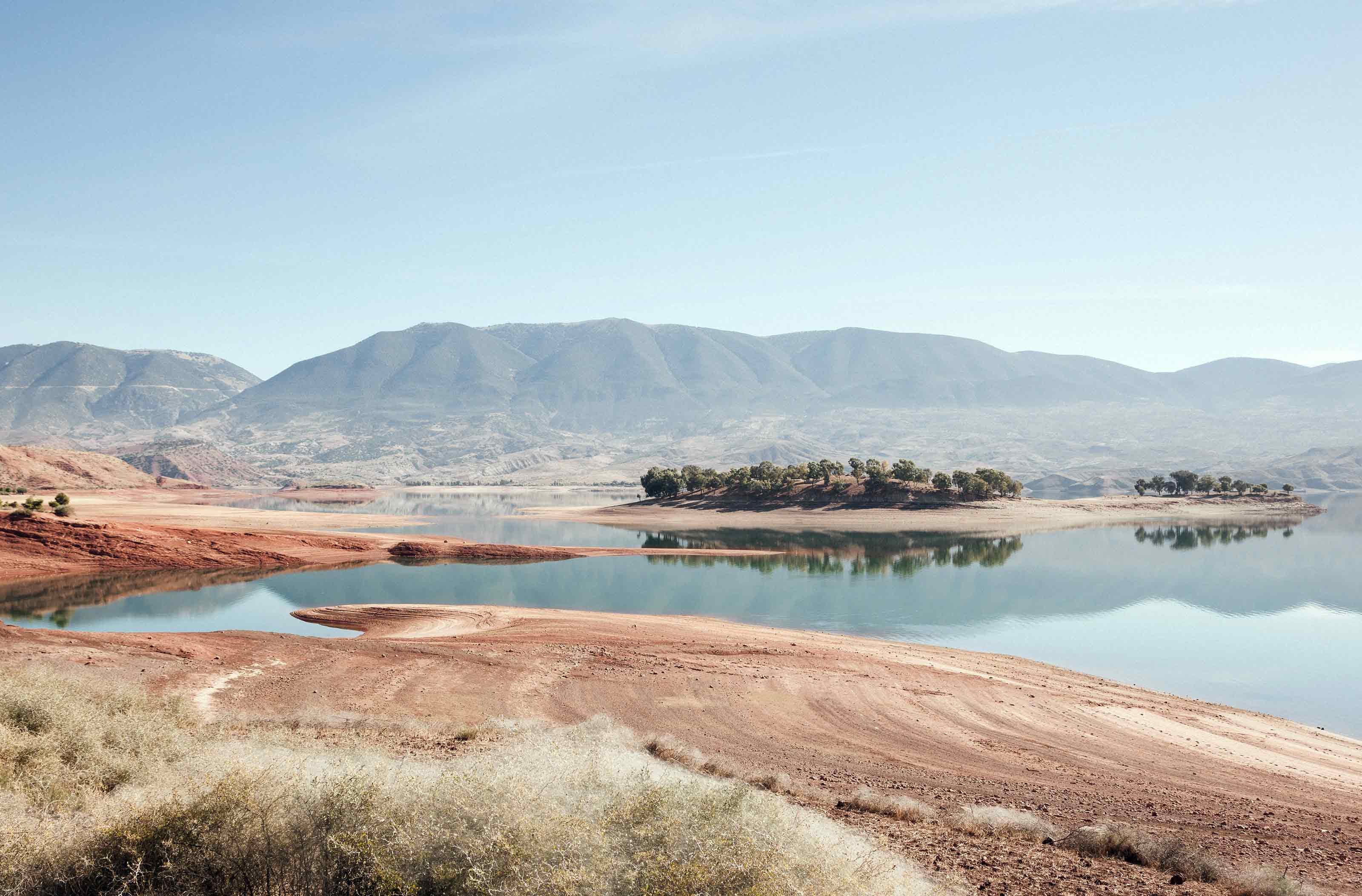 IAfter running some errands and sorting the bikes, it was noon before we finally finally escaped the maze of the Marrakesh, riding loaded bikes through the city’s narrow alleys swarmed with tourists where street vendors lined up tightly. For the first 50 kilometres, the route was relatively flat and so we made good progress, but arriving at the foot of the Atlas hit us and it was uphill for the remainder of the day. With slopes beyond 10% we really felt the load of our bikes and we were starting to doubt if we could actually make it to our calculated first 100 kilometres of the day. Around 16:30, as dusk neared we went on to search for a suitable place to set up our camp; collecting some firewood and cooked dinner over the campfire as absolute darkness surrounded us – no better start to a trip!

IIGiven our less-than-expected progress on Day 1 and knowing the first few kms carried on leading us uphill on a 5% gravel road, we woke up before sunrise to start riding earlier. Our map showed a road to the left, over the summit, marked as a smaller side track but after 5km on this nearly impassable trail, we looked at our map hoping for another better way to get over the ridge. At first it was great fun as we were able to ride some interesting and diverse sections. But the deeper we got into the mountains, the bigger the rocks became and we ended up having to carry our loaded bikes.

At this rate, we were making 2-3 km per hour and, after 10km hike and slide, we were totally exhausted. The sun already set when we reached a small town. People here lived without electricity and running water and rarely got to see tourists, let alone tourists on bicycles. As we rode through the village, people were everywhere and waved to us. In such a mountain village in Germany you would probably not see more than a cat crossing the road, but here it was filled with life. We were at around 2,000m above sea level now. And the temperature had dropped to 5°C. When we finally got back on the road it was already dark. There was no way were going to camp that night and so we were looking for a small guest house in the next village. Despite all the setbacks, this day was an unforgettable experience for all of us. The only problem – our gps showed 30km for the day and there aren’t really many ‘shortcuts’ that lead over the ridge of the Atlas mountains to make up for it… 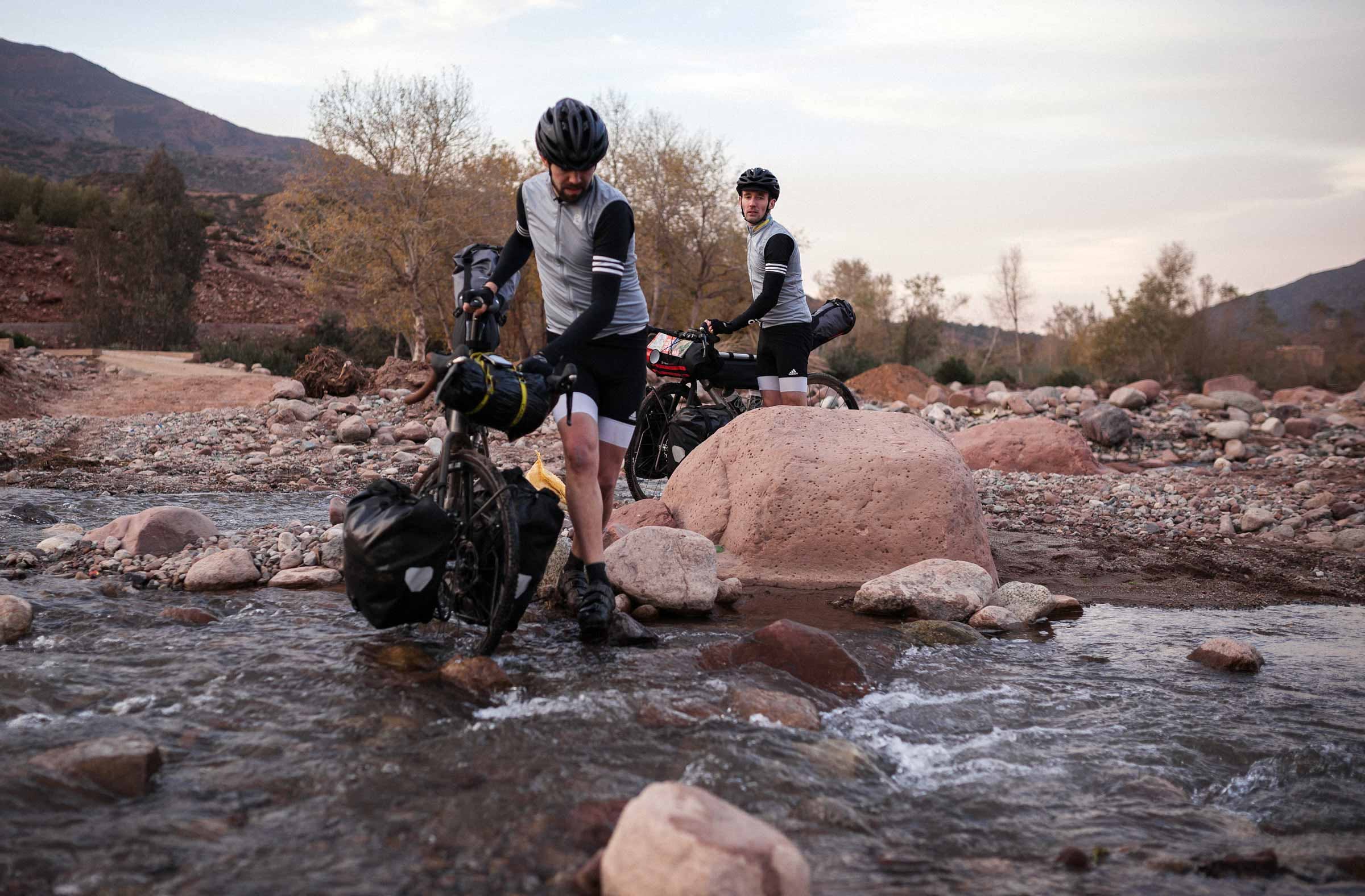 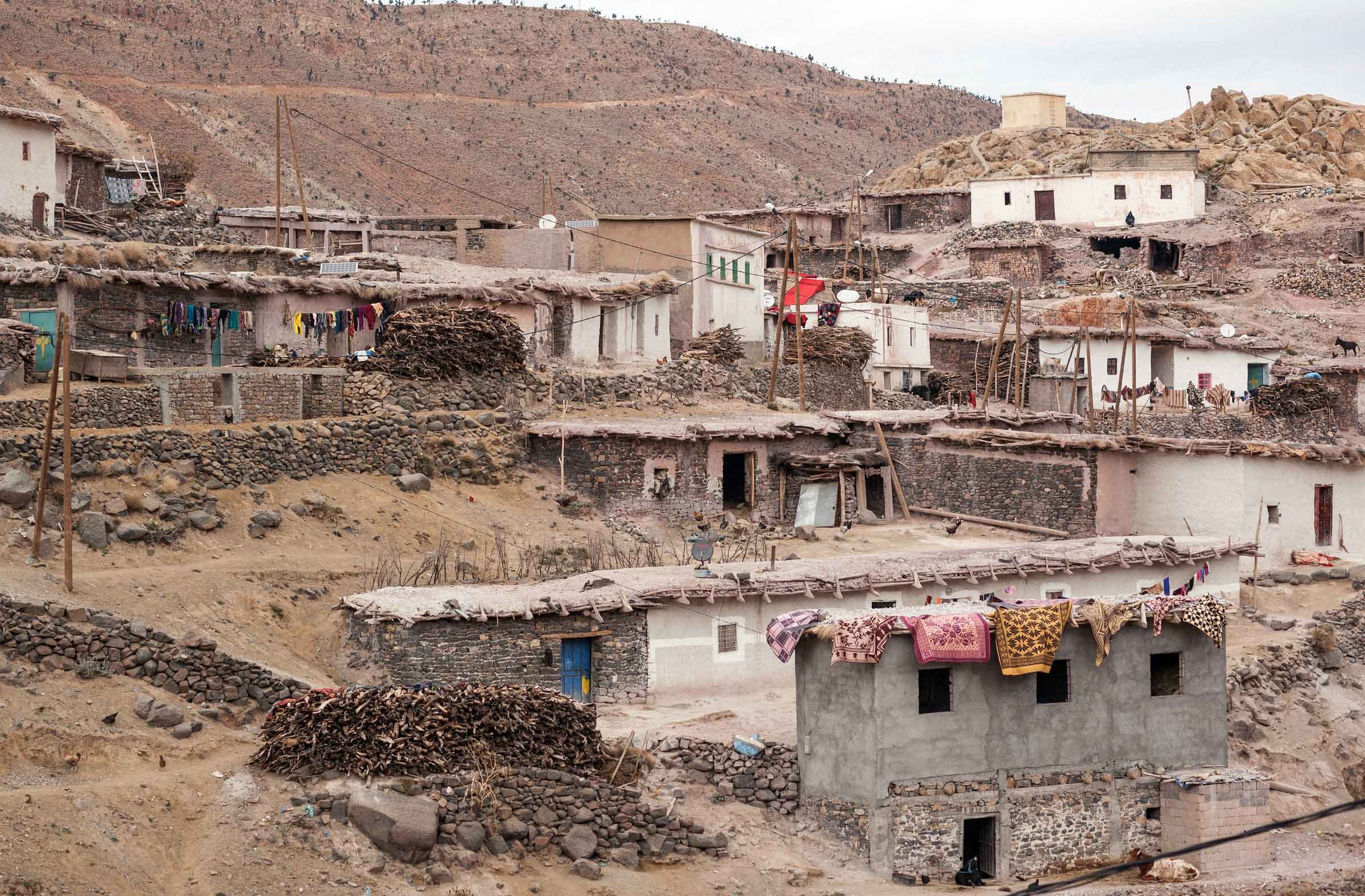 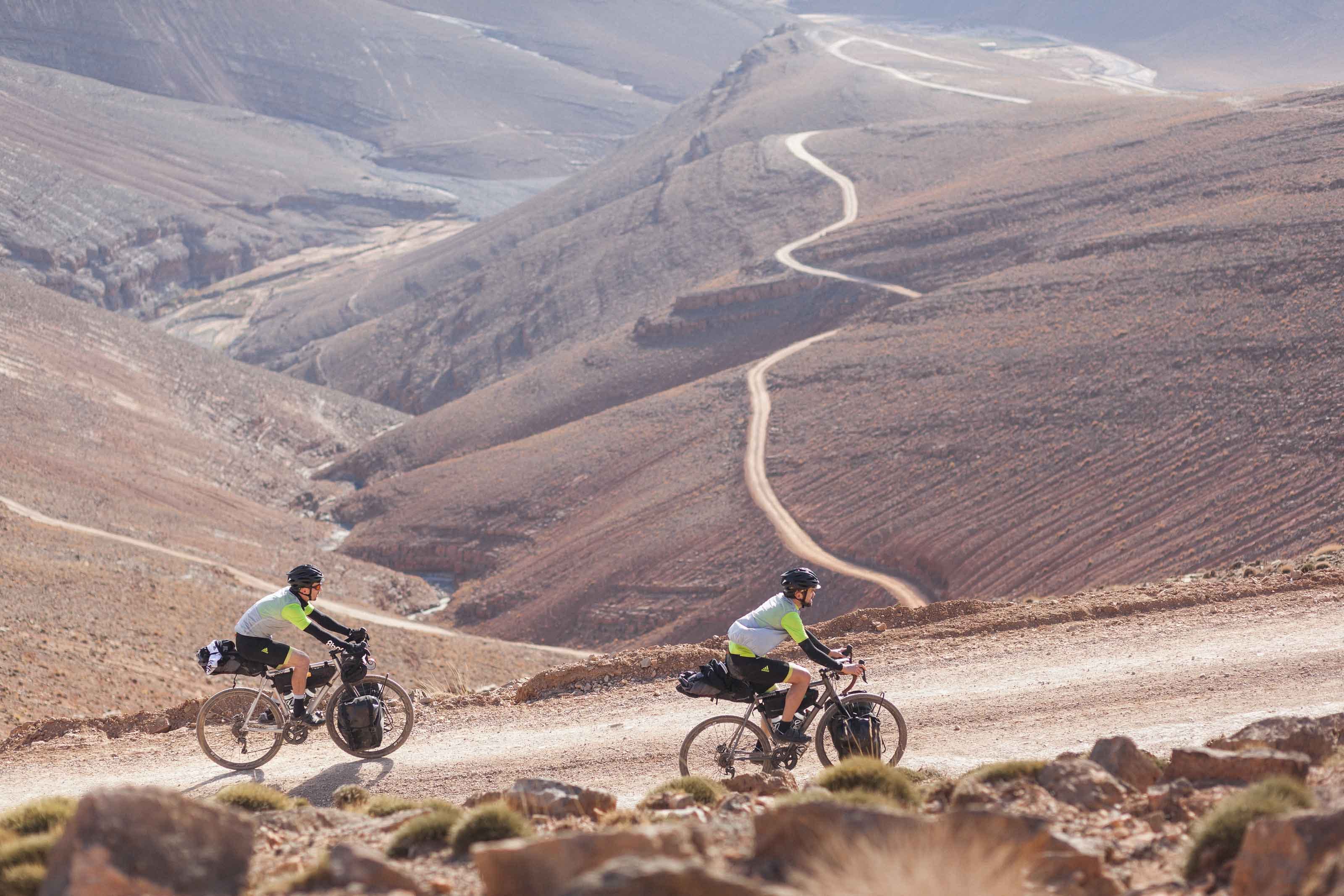 IIIBecause of the good road conditions we progressed quickly and arrived on the summit of the Tizi n’Tichka pass with its height of 2260m early doors. Once there, the wind was cold and icy, so after a short break we moved on quickly. We continued our route on a quiet side road and were rewarded with fine gravel that passed by traditionally built Moroccan villages – entirely made of clay. The highlight of the day was passing an old ramshackle fortress, known as Kasbah, which had partially collapsed many years ago. By the end of the day, we had finally managed to ride 100 kilometres in a day. However, our overall goal was still far, far away.

Today was the day we rode the southern edge of the Atlas Mountains. As we still had to cover quite some kilometres, we decided to solely travel on good conditioned roads so we inflated our tires and off we went on the N10, which we baptized “The Moroccan Route 66” due to its vastness and long straight roads. We made great progress. This was a head down kind-of-day, only stopping after each 50km. When we left our beloved N10 after 120km that late afternoon, we decided to get as close to the Atlas Mountains as possible so we could start the climbing the next day feeling invigorated.

VThis day started off in the Dadès Gorges, which is famous for its dramatic landscapes and hairpin turns. We knew that today would be a challenge and our map showed a steady incline up to the 70km. Meanwhile, the landscape became more and more barren, the air thin and noticeably colder. Over time the road changed from asphalt to gravel and got steeper and steeper. In the late afternoon we reached the highest point of the day at 2895m, which was also the highest peak of our tour. Up there it was freezing cold and windy, our thermometer showed a chilly -2°C. Camping therefore wasn’t really an option having only brought our lightweight hiking tents. The next village was 25km away and the sun had already begun to set so we hurried to make it there as we didn’t want to end up descending on gravel roads in total darkness. So full speed we went. By the time we arrived it was already dark, but we did manage to find a hotel. Since the town is 2300m above sea level, nights can become very cold with temperatures below zero. Luckily, our room was equipped with a wood stove. We used that opportunity to finally wash most of our clothing, drying it in front of the oven. 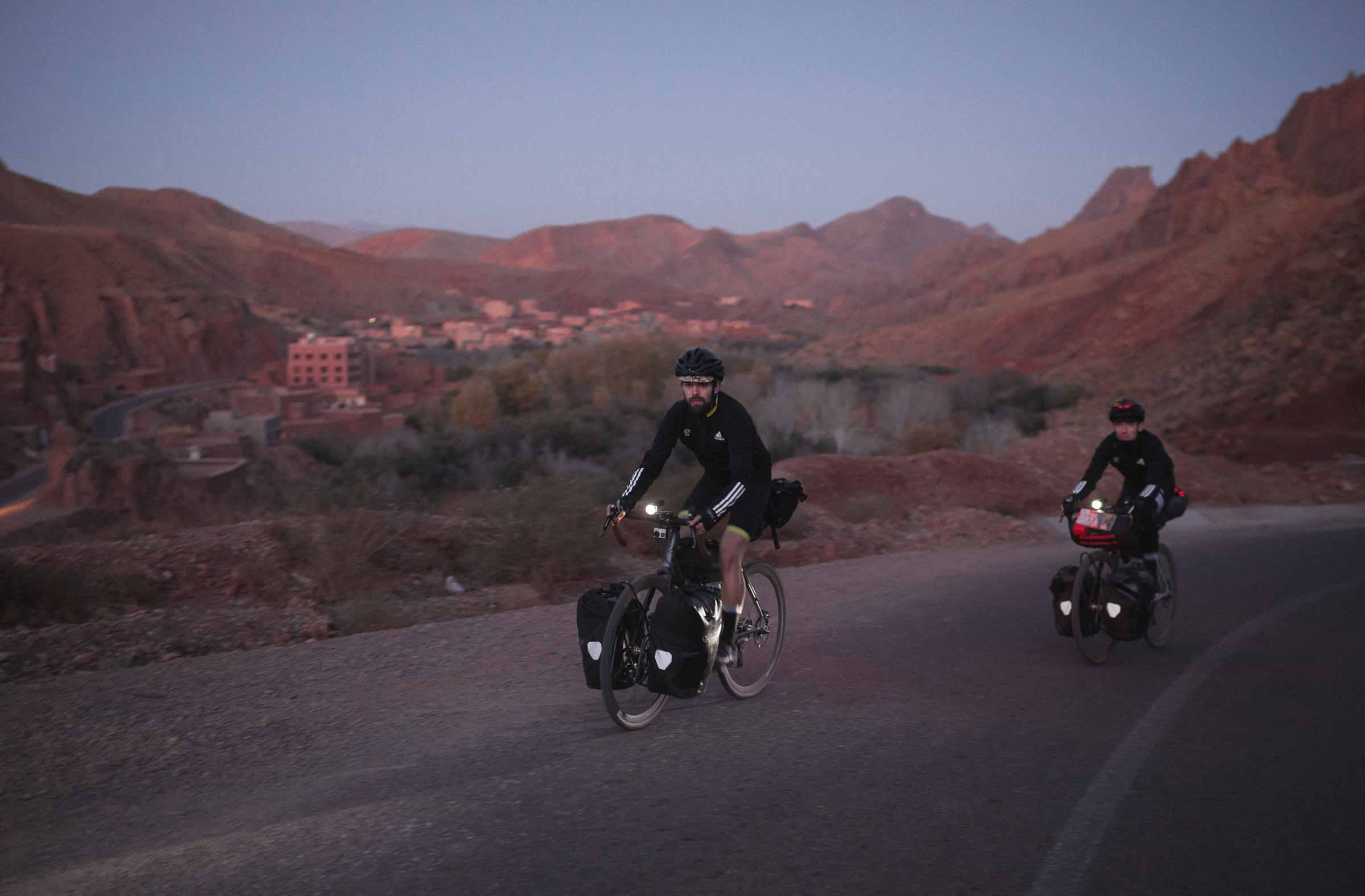 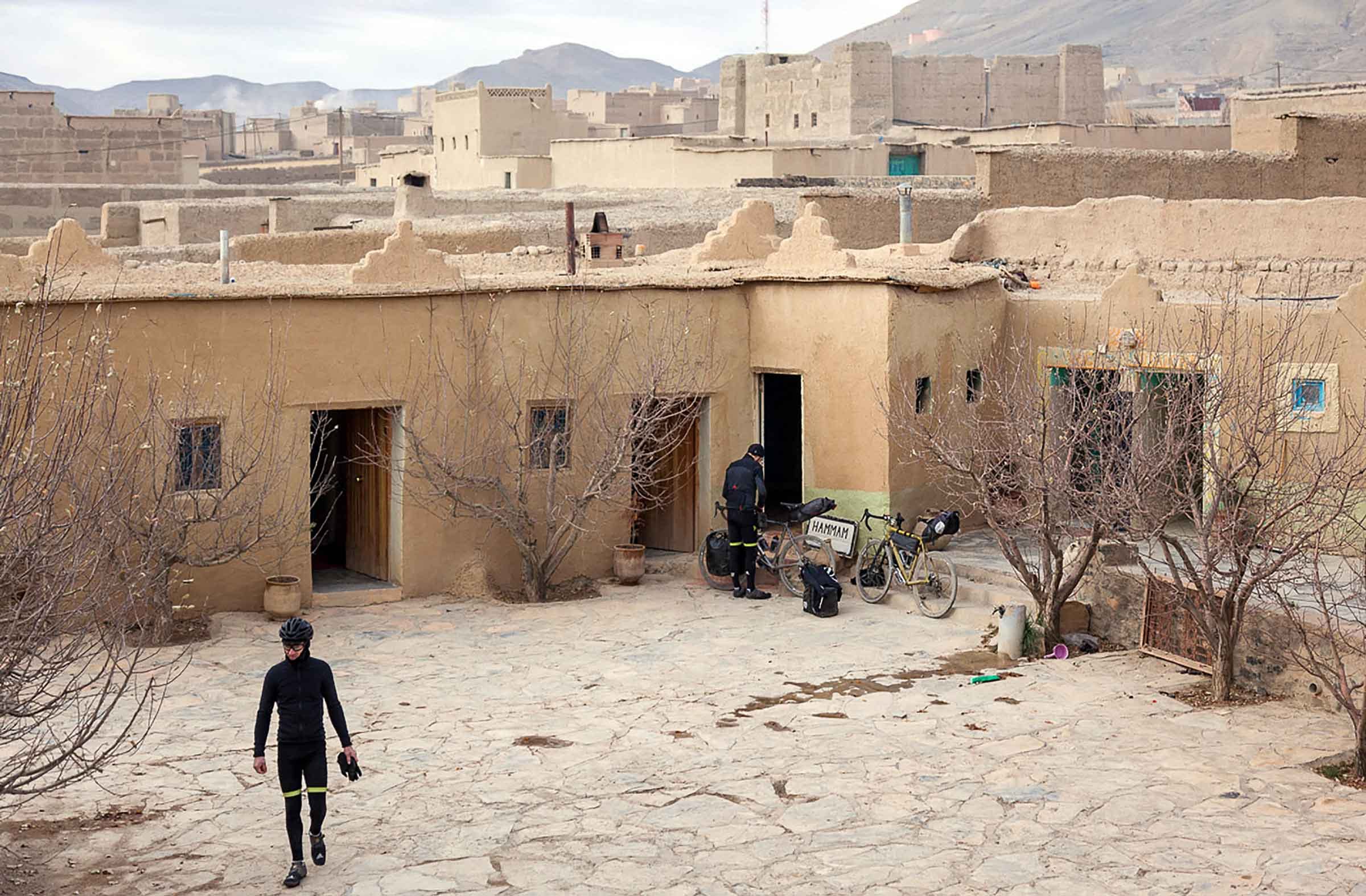 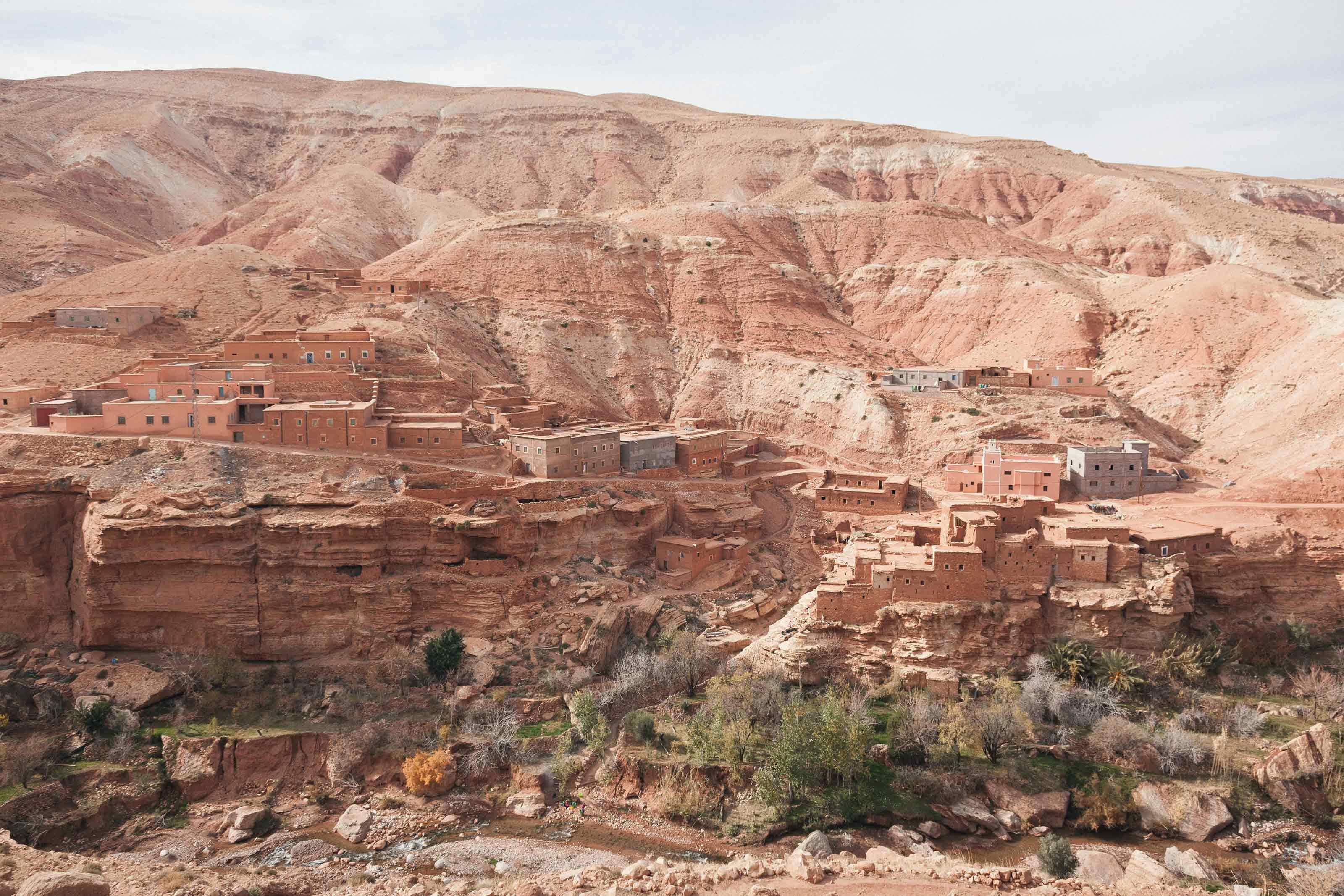 VIToday was a plateau day, in the Atlas Mountains. All day we stayed above 2000m and enjoyed the silence that prevailed there. Since there are no cars, few animals and rarely any trees or plants causing noise, the silence was deafening to a point where it almost became scary. The few people living there belong to the Berbers – Morocco’s original inhabitants who are recognizable by their traditional floor-length hooded robes – and who seemed to enjoy us passing through! Because there’s little civilization, we spent most of our day on gravel roads. Result.Distance: 110.5km Elevation: 1696mTotal: 565.9km

VIICompared to the previous days there hadn’t been any big / extreme ascents on the map, but we spent the whole day riding up and down, ending up with a climbing total of 2385m – the biggest of the tour.

VIIIAlthough we reached our daily goal of 100km the past few days, we still had nearly 160km left to Marrakesh, with one day left – could we make that? We started the morning off with a 10km long climb. After that it was mostly flat, but a strong headwind limited us to a speed of just 20kph. By lunch, we had only managed to cover 70km, so moved onto a slightly busier highway. Every few kilometres there was a sign indicating the distance left to Marrakesh: 68, 51, 47… We gave all our remaining force and energy. At last we arrived in Marrakesh late that night. Being back in civilization we could immediately feel the change. The streets were overcrowded by heavy traffic and the crowds and noise was extremely overwhelming. At least, that’s how we felt after spending a week in absolute silence… 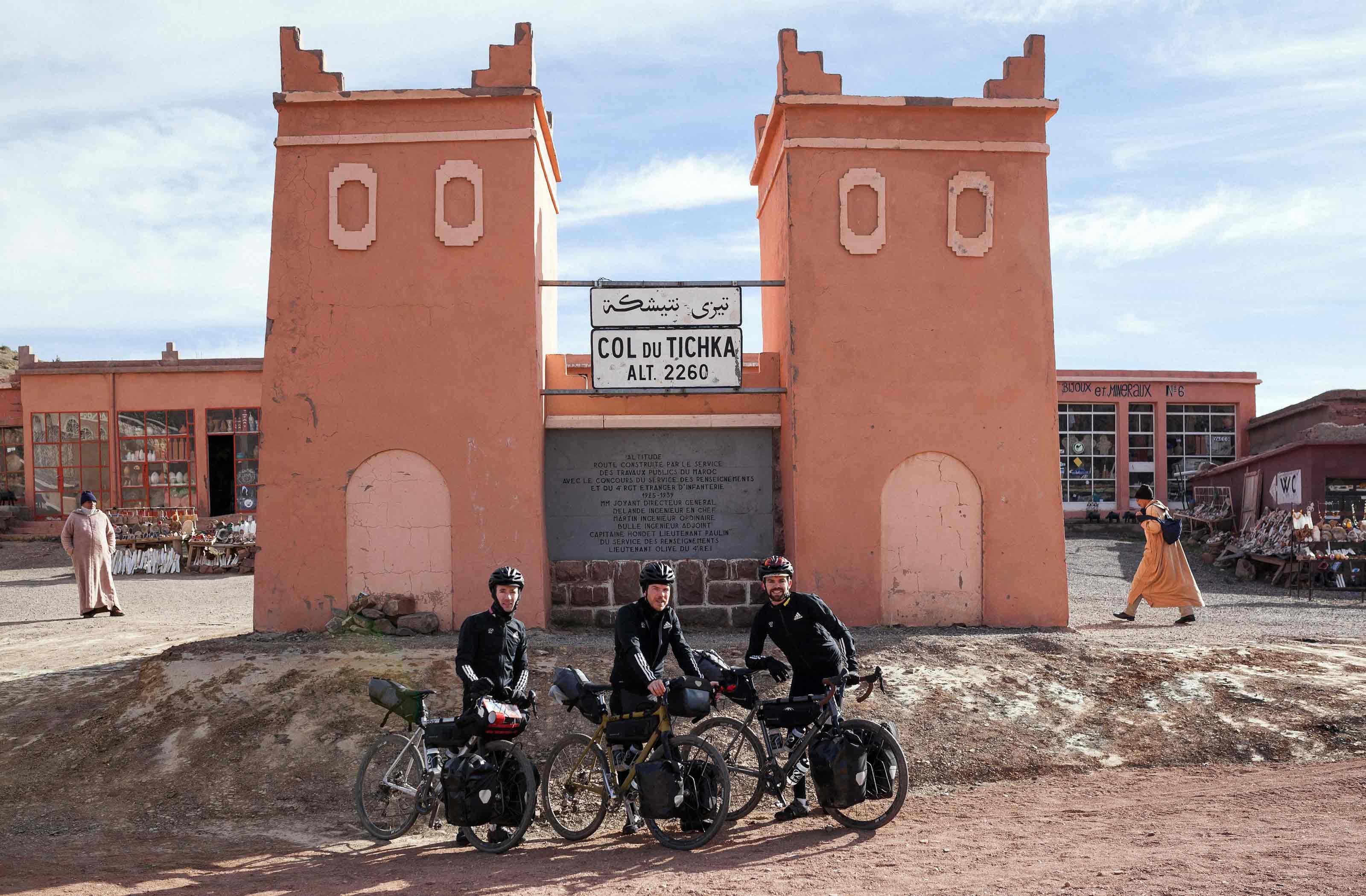 LESSONS FROM THE HIGH ATLASRiding the distances you might be used is tough and quite often not possible in the mountains – especially on gravel and off-road – our 30km day was a big learning curve on that front. So, at times when we regretted not having planned the trip into detail beforehand, in hindsight it was a good job we didn’t – every detour turned out to be a highlight of our journey. As soon as we got off the beaten track people were incredibly nice and hospitable: children seemed curious and playful – running onto the streets to wave at us while motorists honked to salute. We certainly did not schedule a 15km hike over rocky terrain, but by taking those paths we passed through small villages that could only normally be reached by donkey, and met the friendliest people living far outside of civilization along the way.

A perfectly planned tour is a bad recipe for adventure, and adventure was exactly what we longed for. The most important thing is to undertake a trip like this with people that have a similar attitude and on whom you can always count. So if you are planning your next big trip, don’t over plan it. Let loose and experience a true adventure that you’ll never forget…

The terrain in the Atlas Mountains made the 8bar MITTE – a bike that you can use as a road, cyclocross, or adventure bike – an ideal choice. Equipped with disc brakes, lightweight DT Swiss R32 Spline wheels, clearance for all terrain tyres, and the mounting space for panniers it provides a great base for a multi-day bike tour.Given the route went through the Atlas Mountains, we expected to face extreme temperature changes. Summer and winter clothing was an inherent part of our kit list, and the ability to stay overnight in a tent, with sleeping mats, sleeping bags and cooking equipment couldn’t be missed. All of this was carried across our 3 bikes and sets of bikepacking bags, alongside all kinds of spare parts given the lack of bike shops. Stefan additionally brought his entire camera equipment to take photographs, and film the trip… 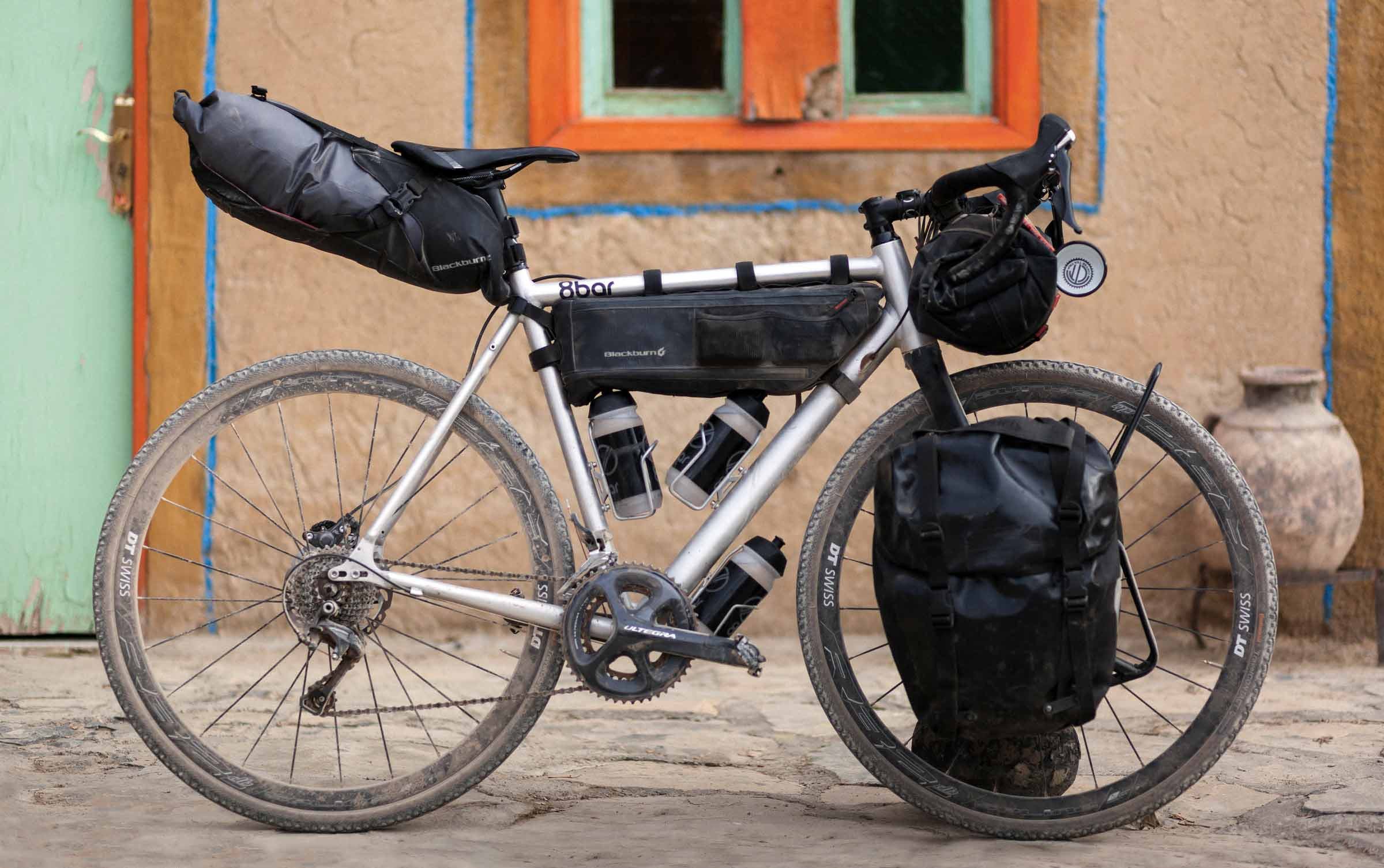 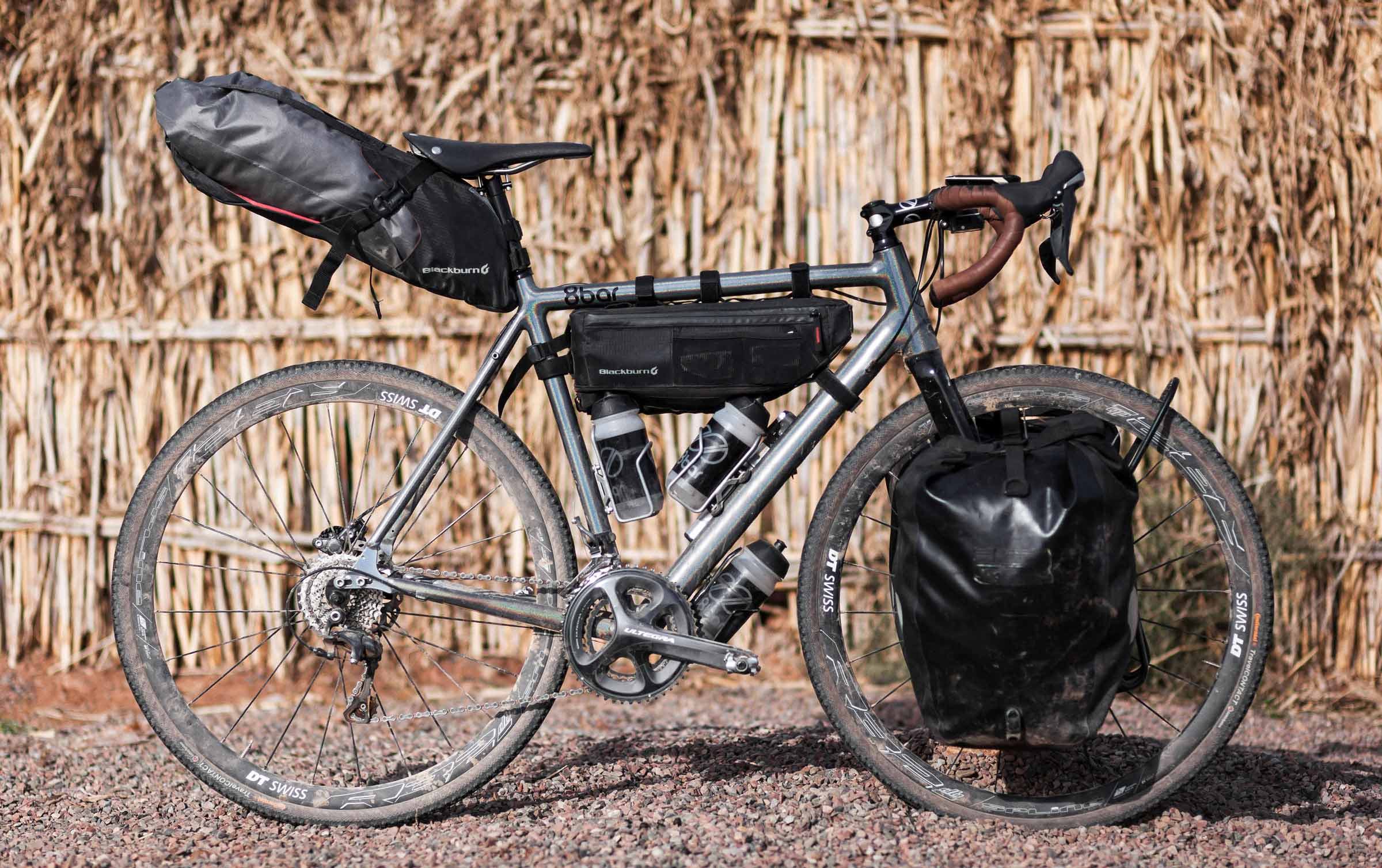